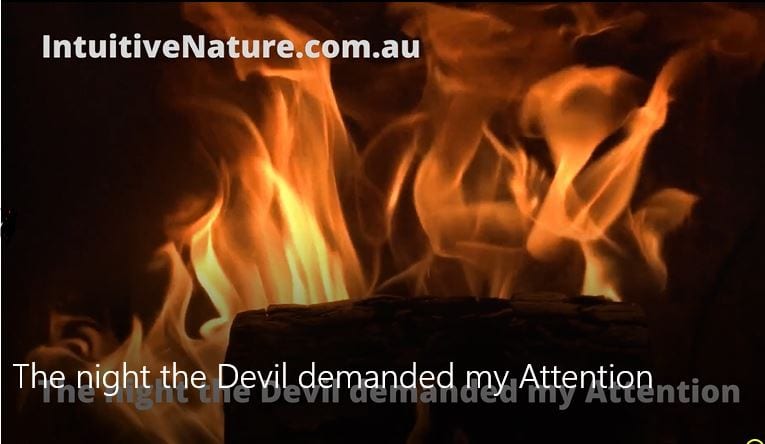 As a young teenager I didn’t like scary movies at all. They evoked too much fear in me and where there was fear there was always negative energies. I just didn’t like feeling that way. Besides I had enough of fear in my life just getting to my bedroom.

I always felt safe and at peace in my bedroom. At the time, my room was full of small fish tanks that I had collected over a period of time. The different fish would greet me as I walked in. Swimming close to the front of the tank waiting for their pinch for food.

By the time I reach my early teens I had shut down the thoughts and feelings about my intuition. Now believing it was just my imagination. Which is why getting to my bedroom so difficult.

The people in the granny flat downstairs had moved out.. As a family, we all jumped into the renovations, connecting the flat to the main house. This was achieved via a narrow internal stair well.

Being on a large sloping block the main part of the old house was lifted by bricks underneath. There was an open section under the house with dirt floors that Dad used as a workshop. The self-contained flat resided below. It was almost like three levels. The main house, an in-between area, that had the bathroom for the flat and then the bottom level. This was a two-bedroom, self-contained unit. Mum and Dad got the stairs built then commenced the constructing and relocation of the laundry.

When you got to the bottom of the stairs, to the right was a very large tiled laundry with a shower and toilet. To the left (there wasn’t any walls) was dad’s workshop with dirt floors, workbenches and tools everywhere.

Did the devil live there?

Right at the back of this sloping dirt area was the semi bricked in space that held up the floor of the kitchen in the main part of house. I know there was something in that space and so did my siblings because we all hated going down to the laundry. Sure, it also meant we had to hang up, fold, iron or put the clothes away but it also meant getting that feeling like something is watching you. None us knew what it was about but all eight of us hated being in that area for a period of time, unless Mum was with us.

It was so excited about having my own room. I was allowed to decorate it anyway I wanted but getting there was beginning to challenge my nerves. I would travel down the full flight of stairs into the laundry area. Quickly turn right and run to the hallway of the flat and leap down another half flight of stairs. To the right was the lounge and around the corner was the kitchen, followed by a spare bedroom.

At the very end of the hallway, which had glass louver windows running along its full length, was my room. I used to hold my breath all the way to my bedroom. Racing myself in a half walk, half run manner. Our friends used to say it was like going into the Jenolan Caves. (One of Australia’s best-known limestone cave system in New South Wales). It always felt cold, dark and creepy which is why I wouldn’t watch scary movies. I had enough scary thoughts running through my head without getting more ideas from movies.

The devil got my attention

One night this fear came to a head. It changed the way I looked at things, not taking away the fear but respecting it for what it was. It was the night the devil got my attention. This was a night I will never forget. Yet I brushed it over the next morning like many other experiences I have had in my life.

I looked across at the shelves between the two small cupboards and I saw flames coming out of them. I held my breathe in fear and stared at the fire image while peaking over the top of my covers.

This fire image grew bigger and bigger threatening to engulf my room and I knew it would continue to move through the whole house. The flames crept slowly at first until they raged with an intensity that was unfathomable, I could even smell the distinct aroma of something burning. Yet the flames weren’t enough to stir me into action. The night was cold and the image of a fire added warmth to my core.

This was when the devil himself appeared to me. He was standing there looking menacingly at me as flames licked around him.  There was a presence around him that demanded attention and I couldn’t drag my eyes away from him. Was it just my imagination? I don’t know for sure but something inside, my intuition, told me to be aware, be careful, be very cautious.

Looking into the future

Strangely enough I knew I was looking into the future; I knew this is what would happen if I didn’t wake up now. I knew I had to do something to stop this out of control monster from taking over me and the lives of my family.

Was it just my imagination? I don’t know for sure, but I do know if it wasn’t for that fear, that image of the devil and that guidance we could have all perished in a family house fire.

It was that image of the devil that forced me to wake up. If I wasn’t that terrified, I may have never woken again but as I forced my eyes open, I noticed one the power points that had the filter for the fish tank, was sparking and sending out puffs smoke. I reached down quickly and pulled it out of the socket and scampered back into bed still fearful of what could be hiding under the bed.

The emotion of fear can be used for betterment which is why it is such an important emotion. Without that incredible fear I may not have acted the way I did. I may not have forced myself to wake up and stop a potential house fire.

I look at fear in a completely different way.

Of course, I still was afraid at different times and I know there was something under the bricked in area of the house, but it didn’t concern me nearly as much anymore. I respected that it was there, and I stayed away from it just like you stay away from hot surfaces in case you get burnt.

Now if something creates fear in me, I look for the warning signs first to see if I am in danger. If that is clear, then I look within to determine if it is a past fear that I no longer need in my life. Like a fear of public speaking or a perceived fear that something will happen that could cause anxiety.

Use fear wisely as it is a strong emotion used to protect you, but it can also restrict you and stop you from achieving what it is you really want. Never accept fear, always seek to understand why you are experiencing it because, although it is acceptable as a temporary feeling, it is not one we should remain in for long. Understand why and transform it so you move away from the darkness of fear and into the light of love.

For more information about connecting with your Intuition visit the website IntuitiveNature.com.au

Please enter your name.
Please enter a valid email address.
You must accept the Terms and Conditions.
Please check the captcha to verify you are not a robot.
& Connecting Now!

We have received your message and will get back to you shortly.

Something went wrong. Please check your entries and try again.

How your Intuition helps your creativity with Angie and Susan

The differences between Passion and Purpose with Kylie and Susan

Finding your New Lease on Life with Michelle and Susan

How to Tune into your Heart Centre

Past Life Regression with Sylvia and Susan